skip to main | skip to sidebar

The TED Spread has calmed down. It now sits at about 25 basis points (bps), well below the 100 bps level that triggers alarm in the credit markets, and miles below the 500 basis points that it was a year ago.
I keep hearing people talk about hitting the bottom of this recession, and the bounce back that is happening. Fortunately, here in Austin, Texas, things never got as bad as they did in other parts of the country, like Detroit, or other parts of the world, like Iceland. I guess all economies, like politics, are local. Except when they're global.
As we near the end of the 2009 Atlantic hurricane season, it's hard to know if the storm has blown over, or if we're just sitting in the eye. As I wrote in this post, I keep thinking that confidence has a lot to do with our situation. If people feel like we are in a crisis, we will act like it, which will hasten the crisis, and a vicious circle begins. If we don't, then consumer spending and reasonable saving will continue, and we will avoid, or at least postpone, a crisis.
Either way, there are some fundamental personal risk management strategies we should all consider, such as eliminating all consumer debt, securing a long-term mortgage at a low fixed rate (a great hedge against inflation or hyperinflation), reasonable, though not excessive, cash reserves, retirement funds largely invested in Treasury issued Inflation Protected bonds (TIPS), and perhaps a modest amount in private equities, like stocks. The very best investment, though, is investment in our own personal health and knowledge, so that we can roll with the punches, adapt to whatever becomes the new working environment, and be happy doing it until we keel over, if need be, because there may be no such thing as "retirement" anymore, if the second wave of the storm is lurking.
Posted by Curtis Wayne at 9:27 AM No comments:

We finally closed on the sale of our old home, and concurrently closed on the purchase of our new one. It took 8 weeks and 11 weeks, respectively, after approval. This was one of those Scenes from the Recession moments. Well, not moments- more like months. And we were the lucky ones.

Our old home was beautiful, less than 5 years old, and sitting on a half-acre, less than 15 minutes from downtown Austin, one of the hottest metros in the country. We listed it on the MLS through one of those DIY, flat-fee listing services, and it took four months to get an offer, more than double the "average" time on market (at least in days past; the average is skewing longer now). Our home was custom-built, weird configuration, so there were not any real comps, which contributed to the longer time on market. But, after the offer, it still took TWO MONTHS to close, and that despite the fact that our buyers had 10% down, strong credit, and affluent co-signers (their parents, who run successful businesses).

The closing kept getting pushed back due to piddly demands from lenders to produce this documentation or that documentation, then rejecting the loan at the last minute, forcing the lenders to shop at multiple lenders for the loan, after having been pre-approved.

"This is normal," their agent explained to us, wearily. "The housing market is fine here in Austin," he said. "But nobody can get loans." So supply is high, and demand is high, but the loans are scarce. Houses are sitting longer on the market, simply because lenders are too nervous to turn loose of the money to anyone but the highest-quality buyers, on the best-quality homes.

After breathing a sigh of relief when our deal finally closed, we then faced the exact same problem for the house we were buying: we had been pre-approved long ago, had 20% cash down payment, no debt (literally), good savings, and plenty of income. What's more, our house was a steal, a foreclosure flip that we had been pursuing for months. Because ours had liens against it, we had to wait to close, but even then, the date kept getting pushed back due to underwriting nit-picking.

It's good that lenders are being more careful, and it's good that loan money is flowing, even if it takes a lot longer to turn on the spigot. But had we not been in such a good financial position, carrying two mortgages for a few months could have been financial death. For sellers who are relocating for their job, carrying two mortgages is common.

So what has been the real-world effect of bank bailouts? Maybe I should have applied for my loan at Bank of Curtis.
Posted by Curtis Wayne at 7:31 AM No comments: 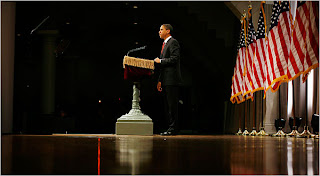 I took a hiatus from all the depressing financial news that I was hearing and promulgating on this blog, hoping that the Christmas spirit, Obama's inauguration, and a little time would help us crawl out of our economic hole.

I mean, the weird thing is that some economic indicators, like the TED spread, and commercial paper (very, very short-term loans to businesses) are starting to look more favorable lately. In Austin, even the housing market is fairly strong, at least for used houses. But other events point in the opposite direction:

I am not exactly sure what to make of this, but I continue to be amazed by the number of people who claim each week that we have "officially hit bottom". I think we're a long way from bottom.

But that does not mean that I am hopeless or depressed. Just realistic. And despite everything, cautiously optimistic.
Posted by Curtis Wayne at 1:59 PM No comments:

No soup for you

Still nothing.
No loans, no commercial paper.  The credit markets are still frozen.
I am really shocked and amazed that there has not been more coverage of this story by the New York Times.  After a $700 billion, er, make that $1.5 trillion bailout, and massive capital injection into our banks, the loan money still is not trickling down to businesses and home buyers.
In it, the reporter is surreptitiously on a conference call with JP Morgan Chase executives.  Chase took $25 billion dollars of the bailout money, at Treasury Secreatary Paulson's behest, after initially declining it.  Paulson insisted, saying that it would be bad for consumer confidence if the public saw that some banks were more in trouble than others.  Go figure.
After being asked by a lower-ranking executive about when Chase would start making more loans, the high-ranking executive running the meeting explained:

[T]he same executive (who I’m not naming because he didn’t know I would be listening in) explained that “loan dollars are down significantly.” He added, “We would think that loan volume will continue to go down as we continue to tighten credit to fully reflect the high cost of pricing on the loan side.” In other words JPMorgan has no intention of turning on the lending spigot.

Translation:  NO SOUP FOR  YOU.
Apparently, even the world's largest banks are not immune to the credit crisis of their own making.  Too bad the CEOs of those companies don't suffer the same consequences.
Posted by Curtis Wayne at 11:37 AM No comments:

America elected it's first black president this year, and did so emphatically.
Not sure either party candidate has a good answer to the current fiscal crisis, but this is hopefully a major step forward in breaking down racial barriers, and incentives for young black Americans.
Congratulations, President Obama.
Posted by Curtis Wayne at 1:18 PM No comments:

Do I hear ONE DOLLAR, anyone?

Now, this can't be good.

The UK Telegraph and The Economist both reported that Greek shipping ports are filled with huge container ships, all going nowhere. Two months ago, the ships rented for $234,000 per day; now, they are renting for just $7,500 per day.
UPDATE: Now zero dollars.

And they are still in port.
Why? Because major banks are not lending money, especially for the short-term lines of credit that keep the majority of companies in business, all over the world. But wasn't this huge government bailout supposed to capitalize the banks to do just that?

Yeah, it was. Looks like we were sold a bill of goods. Why this story isn't getting more play in the national media, I do not know.

The Greek shipping crisis is a symptom of the interrelated credit mess that is currently unraveling. Businesses that need short-term cash (i.e., most all of them) are in trouble. This commercial paper, as these short-term lines of credit are called, is still largely locked up, though it has begun loosening a little bit recently.

Recent national TV news stories about car dealers whose sales are thriving, but still have to close their doors because they can't get short-term cash to buy inventory, are still more signs. Businesses that need large amounts of cash will feel the pinch first. But the trickle-down effect is what I fear most.

As I write this on election night, it becomes more apparent than ever that a new U.S. president is not the most powerful man in the world.
Posted by Curtis Wayne at 7:24 PM No comments:

Safe to come out yet?

A glimmer of hope on close of business Friday, October 17: the TED spread dropped below 4 pts, and global markets closed significantly up, including the FTSE, Dow Jones, Hang Seng, and the Nikkei.
Posted by Curtis Wayne at 10:02 PM No comments: